The report summarises the activities and efforts of the Commission Against Corruption (CCAC) in corruption fighting, ombudsman and integrity promotion. and it also includes summaries of part of the cases investigated and handled by the CCAC in 2015.

The summary of the report is as follows:

In 2015, the CCAC received a total of 793 complaints and reports, including 262 criminal cases and 482 administrative complaints which were pursuable. 568 cases were concluded, including 256 criminal cases referred to the Public Prosecutions Office or archived upon completion of investigation and 312 ombudsman cases completed and archived. Moreover, the CCAC received a total of 1,104 counts of enquiries of different natures.

Of the criminal cases investigated in 2015, most involved crimes committed by public servants and a wide range of crimes were involved, namely active and passive bribery, forgery of documents, power abuse, breach of secrecy and unexplained wealth, etc. Among these cases, the situation is more serious in the collusion between public servants and businessmen to commit bribery in conspiracy during the construction work, procurement, and outsourcing of services of the public sector. The SAR Government and all public departments should pay great attention to such situation and strengthen the discipline and conduct requirements of public servants, as well as improve the relevant laws and regulations to plug the loopholes that might trigger corruption.

The corruption and bribery cases in the private sector showed a decreasing trend. No private bribery cases could be successfully referred to the judicial institutions throughout the year. To sum up the experience of investigation, the main reason is that the related crimes are semi-public offences. The private sector would choose to smooth things over and not to exercise the right to file the complaint, resulting in the CCAC not being able to follow-up such cases under the law. The CCAC deems necessary to improve the law Prevention and Suppression of Bribery in the Private Sector and to further enhance the integrity awareness of the citizens.

On the ombudsman front, the cases mainly concerned the system related to public service, disciplined services management and their law enforcement, land and public works, municipal affairs and traffic affairs. The CCAC also finished targeted investigations into two cases and released the “Investigation report on municipal ordinances and municipal regulations” and the “Investigation report on not declaring forfeiture of 16 land concessions”. When handling ombudsman cases and conducting targeted investigation, the CCAC found that “obsolete laws” were used as excuses for some public departments who deviated from the “principle of legality” in administrative procedures and administrative acts. The persons-in-charge of the departments should promptly find out outdated legislation and actively put forward suggestions and proposals to amend the law in order to ensure “legal administration”. Moreover, leaders and chiefs of public departments should also seriously study how to, under the circumstance of not breaching the law, exercise “discretion” vested by law to improve the administrative procedures and service models which have long been used.

The CCAC strived to carry out various integrity education work and do promotion at schools and the community. It proactively organised talks and promotion activities on the law of Prevention and Suppression of Bribery in the Private Sector for the local enterprises. In 2015, a total of 463 seminars and symposia were organised, with 25,540 participants. 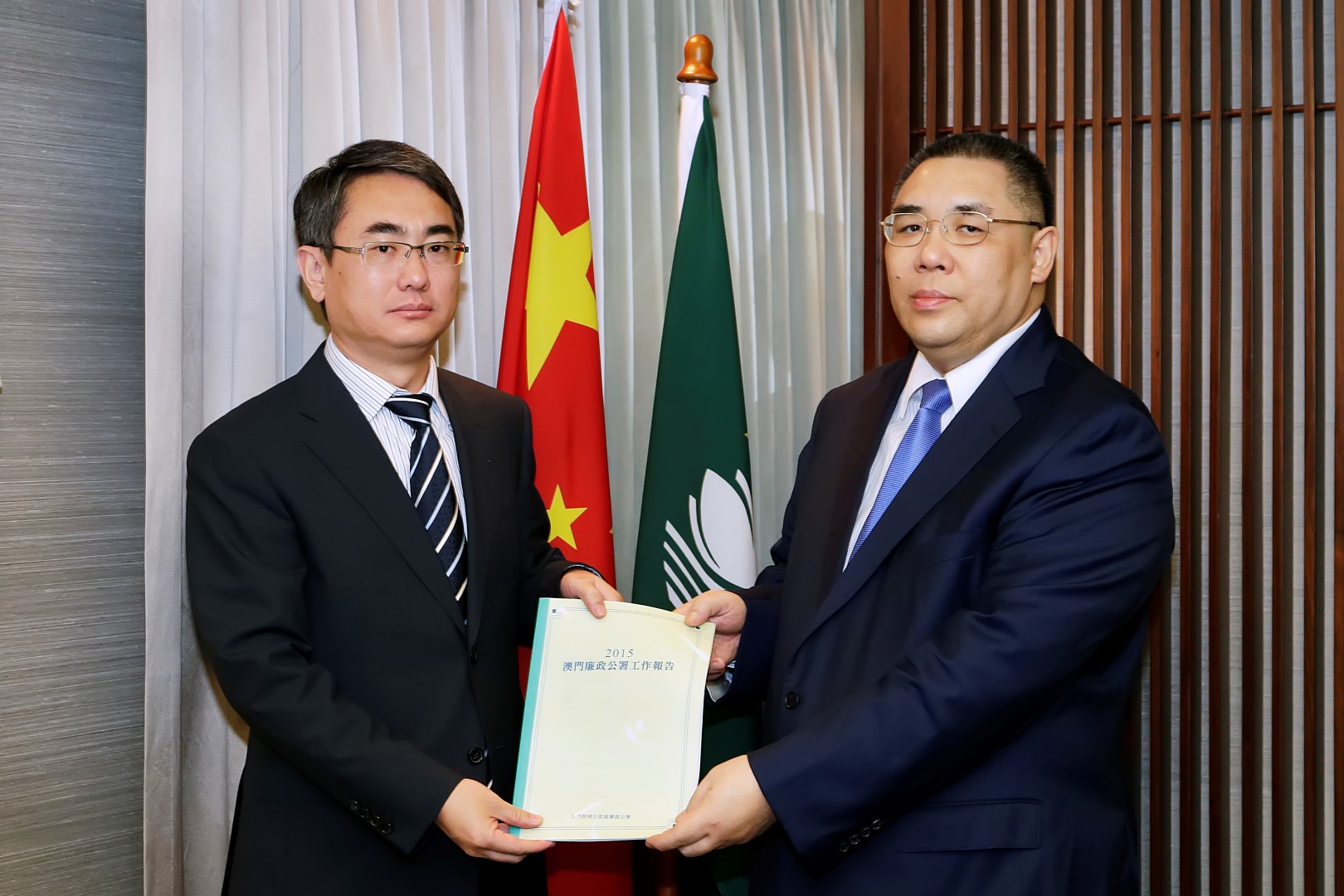 The Commissioner Against Corruption, Cheong Weng Chon, submitting the 2015 Annual Report of the CCAC of Macao to the Chief Executive, Chui Sai On